Like many films of the era, 2007’s Ghost Rider received a tie-in game — and it actually deserves credit for being a great God of War clone.

In 2007, the Spirit of Vengeance Ghost Rider finally made his big-screen debut. The film has action to spare, and when its inevitable movie tie-in game was announced, 2K Games made sure to inject that same level of action into it. However, to deliver on the character’s history and tie it into the essence of the movie, the developers evoked a classic PlayStation franchise.

Around the same time, the God of War franchise was going strong, recontextualizing hack-and-slash gameplay for an older audience. Through Kratos’ eyes, players could feel the power of a god while taking on some of Greece’s most powerful deities. The Ghost Rider game captures a similar feeling by borrowing some game elements and letting players hack and slash their way through hordes of demons to vanquish evil.

From the moment the game begins with Johnny Blaze trapped in Hell, the similarities to God of War are clear. The player evades with the right stick and mainly uses a chain to whip enemies and inflict widespread attacks. These operate similarly to Kratos’ Blades of Chaos and can be upgraded to utilize even more devastating combo attacks. Ghost Rider can also grab enemies when they’re dazed to deliver a devastating finisher, just like Kratos. 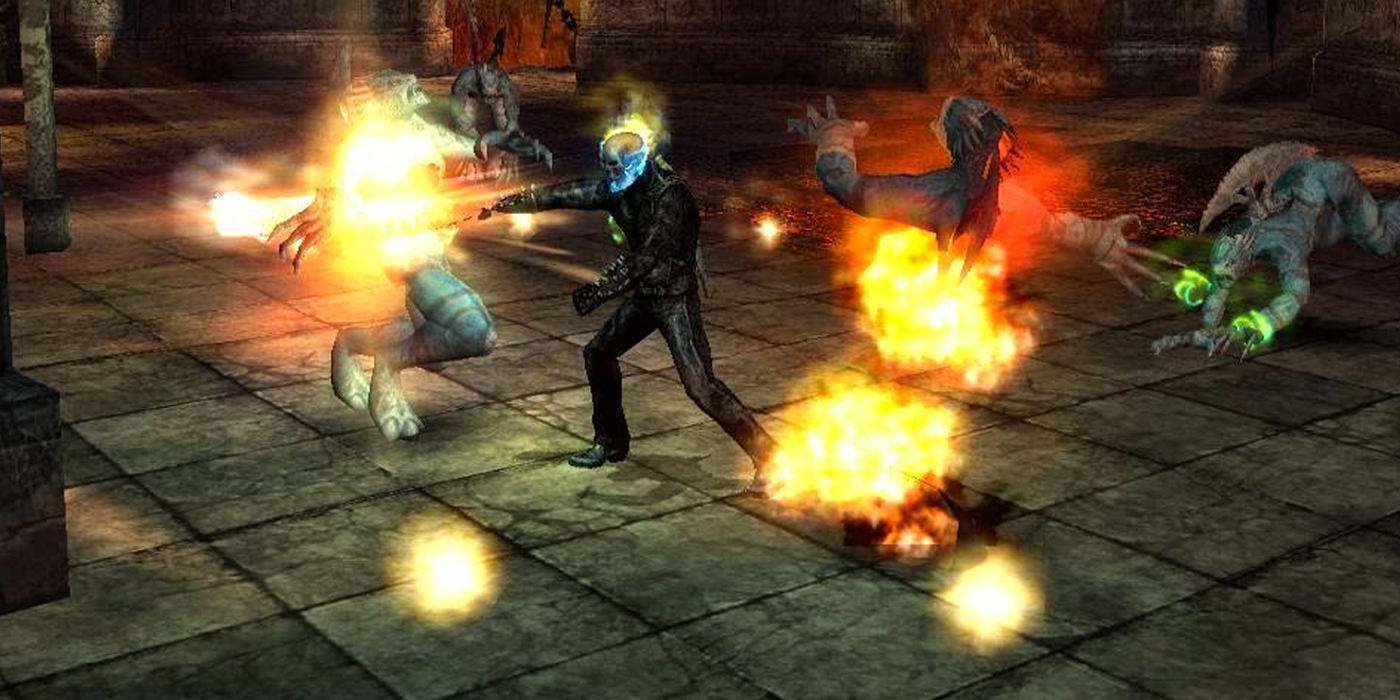 While God of War is a major influence on the title, there are also hints of another hack-and-slash game acting as the glue that melds the Marvel hero with the Spartan warrior. Ghost Rider will often be sealed off in a particular room during combat and have to build up a combo gauge to beat certain enemies. These mechanics are reminiscent to Devil May Cry, and help the rider become an unstoppable force when delivering attacks. While DMC‘s influence is faint, it helps combine the grittiness of God of War with the supernatural world of Ghost Rider.

RELATED: God of War: Why The Leviathan Axe Is a Match for Thor’s Mjölnir

The ferocity of Kratos is felt strongly in the boss battles as well. As the game progresses, Ghost Rider’s enemies grow in stature until he faces a gargantuan version of Mephisto’s son, Blackheart. Beating him takes timing and patience, as Ghost Rider must use his strongest attacks at the right moment. While watered down from the typical God of War battles, the level is a tasteful homage to a soldier taking on someone who is both literally and metaphorically much larger.

Since being an amazing God of War clone wasn’t enough, the game also includes bike levels that have Ghost Rider racing around and taking on enemies with his Hell Cycle. The levels were relatively short, but they provide some of the most memorable parts by maintaining momentum while changing up gameplay. While 2007’s Ghost Rider game may not be remembered as the best movie tie-in game, it’s still deserves to be seen as a great God of War clone.

KEEP READING: The Fantastic Four Had a Dungeon Crawler Game – And It Was AWESOME

Japanese Government Appoints a Vaporeon as Its Water Ambassador

CBR Features Writer Nick Brooks has been writing for over ten years about all things pop culture. He has written for other sites like Animemojo.com and Gamefragger.com. When not writing you can find him with his lovely girlfriend, cooking, reading comics, or collecting any new Star Wars Black Series, Marvel Legend, or Transformer. For more of his thoughts on pop culture check out his blog, The Next Panel with Comic Brooks.